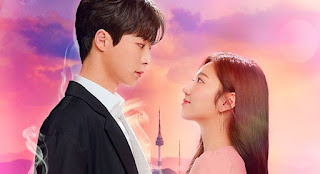 Wow There is the latest Korean Drama namely Kiss Goblin which is the production of WHYNOT Media. The Drama is also known as “Kiss Ghost”, although the title is rather spooky but very good to watch.
Kiss Goblin raises the genre of Comedy, Romance, and Fantasy of course this genre is liked by many circles. The drama will be aired on July 28, 2020 on Naver TV, and it can be witnessed every Tuesday and Wednesday.
As for Youtube KOKTV will be aired on July 30th, 2020 with subtitles English until it can be translated to Indonesia. The main cast of the drama are Bae In Hyuk and Jeon Hye Won. Actor Bae In Hyuk was previously known for starring in the drama XX (2020). For Jeon Hye Won ever played in the play A Poem a Day. The drama also stars Lee Jung Min, Jang Eui Soo, and Lee Se Hee.

Title: Kiss Goblin/Kiss Ghost/키스요괴/Kiseuyogoe
Genre: Comedy, Romance, Fantasy
Country: South Korea
Directed by: – writer
Screenplay: –
Producer: –
Production house: WHYNOT
Number of Media episodes: 12 episodes
TV Station: Naver TV, KOKTV, V-Live,
Youtube broadcast time: July 28, 2020 Schedule
Aired: Tuesday and Wednesday
The Drama synopsis Kiss Goblin Plot tells the story of a ghost/Goblin figure named Ban Sook (played by Bae In Hyuk). He has lived more than a century and a half. Its current age is 160 years old. He’s a rude person and has no emotions. But one day Ban Sook wants to be human.
For the sake of being man he must be able to fulfill his mission and get the love of man he is willing to kiss. Ban Sook needs to kiss 10 times to become a human. On the other side there is Oh Yeon Ah (played by Jeon Hye Won), a brave young girl, a man and 21 years old. He does not want anything, his dream is very simple, ie living ordinary life. But everything he did was annoying and happened to him.
Now he is a student, Oh YeonAh hates humans. Ji Seung Heon (Moon Ji Yong) is also a 21-year-old human. Have a unilateral love to Oh YeonAh for the last 2 years. He’s a simple guy, open, and sometimes looks stupid. Yoon Seol Hee (Lee Se Hee) is a 21-year-old human. Friends of them. He is his best friend Oh Yeon Ah. He secretly likes Ji Seung-Heon.
Meanwhile, Choi Hee Won (Lee Jung Min) has lived for 1202 years. He goblins Fire and queen of the Goblins. The figure looks mysterious and feared by everything. But in fact Choi Hee Won is a graceful woman even sometimes she is also awkward. Exorcist/Devil’s Exorcist (Jang Eui Soo) is a cruel and cold man. He tried hard in doing all things.
In addition he is also destined to be the exer of the goblins and rescue mankind. The one he rushed was Ban Sook. Can Ban Sook go through his entire mission and become a human? What will Satan’s Exorcist do with him? MAIN CAST player Bae In Hyuk as Ban Sook Jeon Hye Won as Oh Yeon Ah SUPPORTING ACTRESS Lee Jung Min as Choi Hee-Won, Goblin queen Jang Eui so as Exorcist Moon Ji-Yong as Ji Seung-Heon Lee Se-Hee as Yoon Seol Hee.
Please share or bookmark this page when this information is useful, do not forget to always spread the positive things in your environment Yes