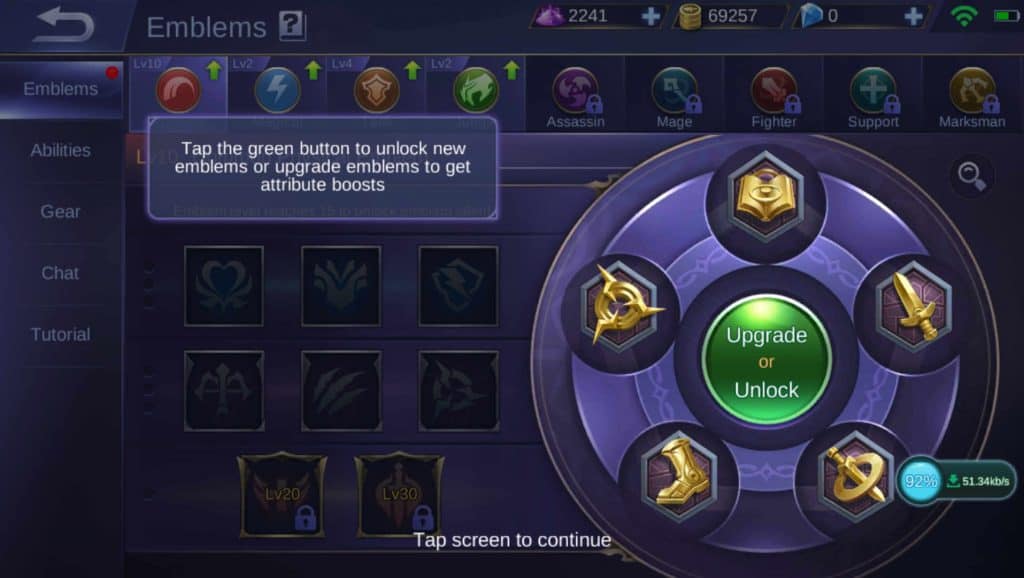 Mobile Legends emblem is an interesting addition to the game. Initially, the emblem system was designed to give you a slight boost on your attributes, which provides you with slight advantage against new players who just started the game. It is not game breaking, but every little thing helps!

This is one of the most exciting features added to the game. There are 3 tiers of talent trees available and will be unlocked at level 15 (comes with one free talent point). After that, you will get additional talent point every 5 levels. You will get a total of 7 talent points at level 45.

You have to spend 3 points in any tier 1 talents before you could proceed to upgrade tier 2. You can have up to 3 talent points each in tier 1 and 2. You would need to reach a specific level to unlock tier 3 talents (20, 30, 40).

Tier 1 and 2 will provide basic attribute boosts while tier 3 will give you the strongest effects. However, you can only choose 1 talent in tier 3.

Talent points can be reset and distributed for free. Just click on the reset icon next to the talent point.

There are two talent pages for each emblem set. You will get the first one for free, but the second one requires a Starlight Membership subscription. Talent page will save your current build, which is useful if you would like to try out different build without resetting your talent points, but it is not necessary unless you already have a Starlight Membership.

The two common emblem sets are free (Physical and Magical). Additional emblem sets will be available when your account reached level 10. You can unlock two of them for free, but you need to spend magic dust or diamonds to unlock the rest.

Some adjustments have been made to the attributes and cost to make the upgrade more reasonable. The total cost will be similar to the previous system. Take a look at the table below to see how many emblems are needed in total:

The 9 Emblem Sets in Game

There are a total of 9 emblem sets available in the game as of the latest patch, which is the following:
Physical
Magical
Tank
Jungle
Assassin
Marksman
Mage
Fighter
Support

Physical and Magical are the most common emblem sets. Both of them are quite fast to level up due to the amount of fragments you can easily get. Tank and jungle fragments are rarer than both physical and magical. Assassin, marksman, mage, fighter and support emblem fragments are the rarest of all based on my observation.

It is highly recommended to pick one custom emblem set and max out its level. The reason is that it is not cheap to level up. It takes more emblems/magic dust and battle points to upgrade at higher level. Also, custom emblem sets have better tier 3 effects compare to the common emblem sets.

Let’s take a closer look at each of them and see which one suits you best!

After dealing damage with skills, increases physical attack by 5%, lasts 3s, this skill has a 6s cooldown.
Shield

Killing a minion grants 2% of max health and 3% of max mana.
Vitality

After dealing damage with skills, increases magic attack by 11 – 25 (increases with hero level), lasts 3s. This skill has a 6s cooldown.
Awaken

When health is below 40%, gains an increased 35 points of physical and magical defense.
Firmness

Crowd control an enemy grants 5% of max HP. This effect has a 10s cooldown.
Shield

Converts 0.4% of max HP to physical attack and magic attack.

Retribution’s slow effect increased by 20%, and will also deal 210 – 350 points of true damage (scales and increases with hero level).
Greed

Increases damage dealt to the Lord, Turtle and Turrets by 15%, damage taken from the Lord and Turtle reduced by 20%.

Increases damage by 6% on the enemy hero when he is the only nearby hero.
Agility

Basic attack has a 20% chance of reducing target’s movement speed by 90% and attack speed by 50%. This effect has a 2s cooldown (not effective for melee heroes).

Gain an extra 16 gold from minion kills. This effect disappears after 10 minutes of gameplay.
Mastery

When dealing damage that is more than 10% of target’s max HP for 3 times in 5 seconds, burns the target 3 times, each burn dealing 82 – 250 magic damage. This effect has a 20s cooldown.
Agility

Dealing damage with skills will deal damage equal to 4% of the target’s current HP as magic damage, and restore 3% of your Mana. This effect can only trigger once every 5s.

When being CCed, reduces CC duration by 50% for 2s. This effect has a 10s cooldown.
Shield

Skills will have an extra 20% slow effect, lasts 2s.

After dealing damage to an enemy hero, the damage dealt by allies on the enemy hero will be increased by 6% for 3s. This effect has a 6s cooldown.
Vitality

When healing the ally or granting ally a shield, increases his physical attack and magic attack by 12 – 40 (increases with levels) for 4s. This effect has a 10s cooldown.
Agility

Hybrid Regen +5 Pull Yourself Together (level 40)

Overall, the new emblem system is very powerful and you should focus on upgrading them as soon as possible. Unless you spend diamond in the shop and Magic Disc, there’s no other way to speed up the process.